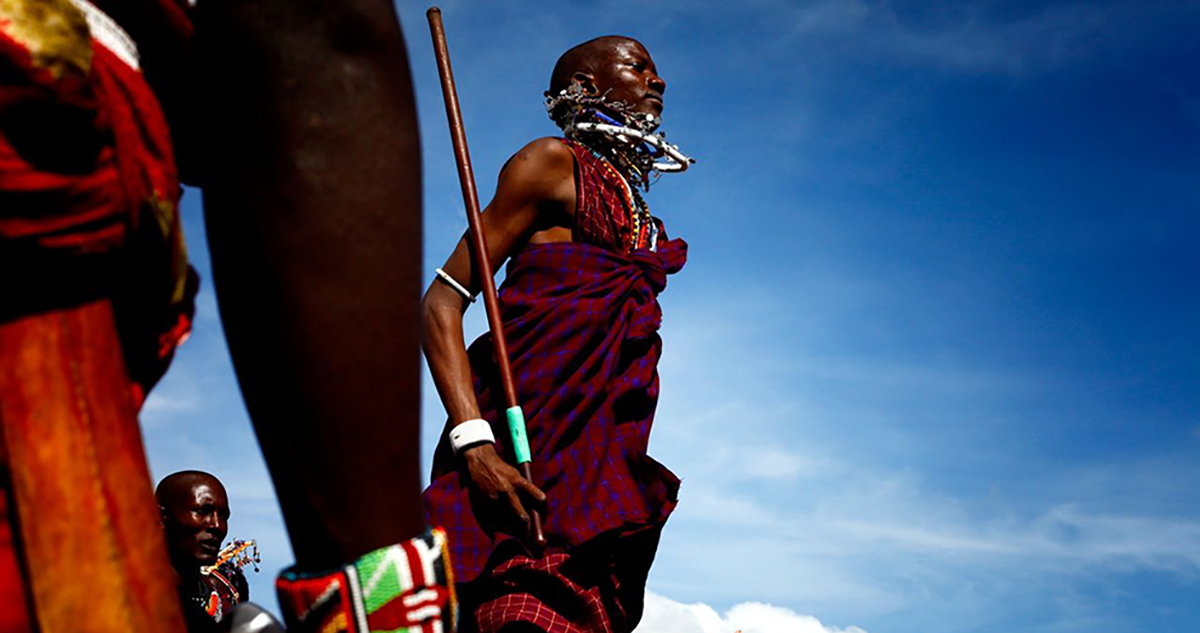 Without a doubt, Masai clothing is so colorful, original and colorful that it powerfully attracts attention. In this post, we are going to review how Masai clothing has been changing and evolving throughout history until today, trying to explain the meaning of its shapes and striking colors.

Origins of the traditional shuka.

Masai clothing has been changing as history has evolved, going through different times and phases. Currently the Masai are dressed in the well-known and traditional “Masai Shuka“, whose original name in the Masai language is Shuka which means “body wrapping”. It consists of a colorful fabric with geometric patterns that is tied over the shoulders or around the body like a coat.

Although the Masai did not always carry these plaid blankets, mainly red, on their bodies. In the past, shepherds used cloaks or capes made of cattle skins (steers, cows, etc.) and women used capes made of sheepskin. The Masai decorated these capes with glass beads that they also used for their crafts and ornaments.

Subsequently, they began to replace the animal leather with colored blankets, made of wool, due to the influence of the English colony, at the end of the 19th century, and from the first Scottish missionaries, who used tartan fabric, in the masai lands.

But it was in the early sixtieswhen these blankets began to be made of cotton, due to the presence of the textile industry, making prices cheaper and consequently making them more marketable, which made this clothing the hallmark of clothing. masai.

The predominant and most used color for Masai clothing is red, however, currently we can also find fabrics of various colors such as black, blue, with multi-colored designs, not only fabrics with different squares, but also striped fabrics, etc. The truth is, that the new Masai generations are introducing variations in the shades of their blankets looking for a more aesthetic than traditional result.

Older women, however, still prefer the color red, even dyeing their own fabric with ocher.

But the main reasons for using the red color are none other than defense and camouflage, since it is a way to warn potential predators and is a hue that offers some camouflage on the extensive savannahs of reddish African soil.

Today, theshuka is not only an outfit, it is also a way of communicating, since through the color of the blanket different messages are sent regarding the status of each person. For example, married people wear blue colored blankets, and young men who have recently had circumcision carry black colored blankets.

The truth is that ethnic fashion has crossed borders and has come from these warm African lands to our countries.

At ADCAM, we offer a series of solidarity creations, made 100% cotton in the social textile manufacturing company A Puntadas and decorated by Masai women, in which 100 % of global profits goes to their community

The “kanga” is a word that comes from the verb ku-kanga, in ancient Bantu (Kiswahili), whose meaning is to wrap or enclose. It is a colorful outfit worn by women and occasionally by men at the Maasai Mara. It consists of a 1.5m piece of printed cotton fabric. by 1 m., often with a border on all four sides, called pindo in Swahili, and a central part mji, which has a design different from that of the edges.

Kangas are usually very colorful and have printed legends called jina in kiswahili. In addition, each piece is unique.

They are t-shirts decorated with the acacia tree and a giraffe, typical savanna landscape in the Maasai Mara.

One of the most characteristic costumes of the Masai people and that distinguishes them from the rest of the communities. Mainly used as a sarong or blanket, the Shukais made of 100% acrylic and we offer a wide variety of colors.